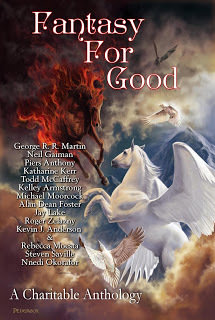 From Sword and Sorcery to Paranormal Romance, from Weird Fiction to Fairy Tales, Fantasy For Good presents a wide range of exciting short fiction to accommodate every taste. In this collection of thirty stories, legendary authors (including NYT Bestsellers and World Fantasy Award winners) and great new up-and-comers in the genre spin tales of magic and mayhem.

Fantasy For Good also includes a classic tale by master novelist, Roger Zelazny, author of the Nine Princes in Amber, who passed away in 1995 after a battle with colorectal cancer. His son, Trent, provides a moving introduction.

All proceeds from the sale of this anthology go directly to The Colorectal Cancer Alliance, a charity dedicated to the prevention of this deadly disease, as well as funding research and supporting patients who suffer from it.